V&A, the temple of the arts and crafts 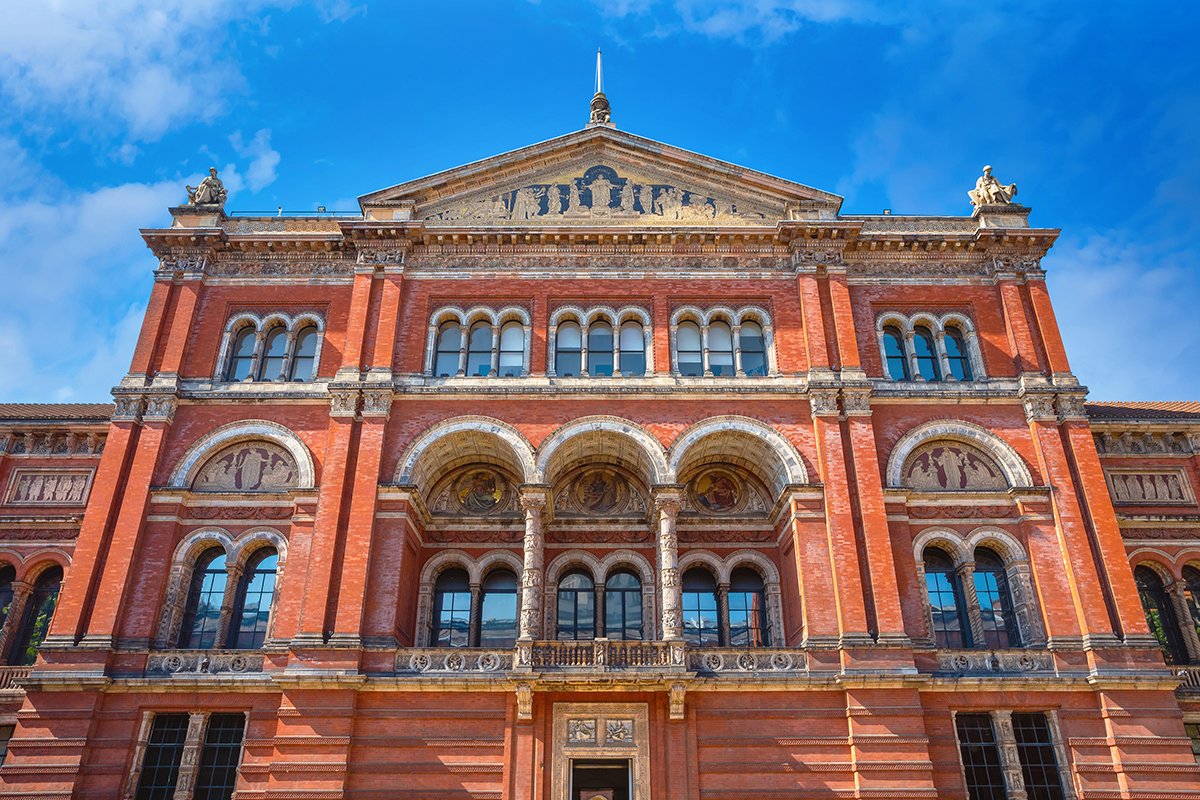 The world’s largest museum of decorative arts and design

Built in 1857, the Victoria and Albert Museum, V&A was first called the Museum of Manufactures and later the South Kensington Museum, before it was officially christened as the Victoria and Albert Museum in 1899. The queen herself was in attendance and laid the final foundation stone for the museum’s new buildings, designed by Aston Webb – it would be the Queen Victoria’s last public appearance before her death in 1901. The couple would never have guessed that their marriage would go down in history as one of the most romantic royal partnerships to exist. In fact their names were to be joined for eternity on one of London’s foremost cultural institutions.

The intent of Henry Cole, first director of the V&A, was to bring together a collection that offered examples of applied and decorative arts (as opposed to fine arts, housed in other museums and galleries), as well as design and science, to give a pushed forward to English industry, educating the population. In fact, as early as 1858, evening openings were introduced, designed specifically for the working class, which had no free time during the day. Since then, the museum’s collection has continued to expand, both from the point of view of the number of exhibits on display, and from the point of view of the arts housed: so much so that today there are also paintings and sculptures of great value. With more than 2.27 million objects, the Victoria and Albert Museum is currently considered the world’s largest museum of applied and decorative arts and design.

The V&A has one of the finest and most comprehensive collections of jewelry in the world. Over 3,000 jewels tell the story of jewelry from ancient times to the present day.

Visiting the museum was on my list of priorities when I first arrived in London, being a jewelry lover.

Their collection is a veritable trip back in time, offering the opportunity to see jewelry history from 1500BC to today, and the designs and trends that influenced our favorite pieces from the Georgian, Victorian, and Art Deco periods.

Smaller exhibits are organized around different themes, bringing the jewelry’s symbolism and personal significance to life. “Cradle to the Grave” highlights materials and designs believed to be integral to different stages of life: from shell fertility amulets to protective figa pendants to jet and onyx mourning jewelry.
If you want to test your stone knowledge, a 154 piece-collection donated to the museum in 1869 by Rev. Chauncy Hare Townshend shows a circle of different stones mounted on rings. The swirling, colorful display of rubies sapphires, tourmalines, aquamarines and more is a remarkable way of getting acquainted to this sparkling world.

Guests and donations: from Kashmira to Beyoncé

A good reason to ascend the gallery’s pristine stairs is the Kashmira Bulsara collection of vanity cases on from loan from Freddie Mercury’s sister Kashmira Cooke, with the promise of an eventual gift. Lacquered, gem-set, enamelled, or inlaid with lapis and turquoise, the cases represent work by Cartier, Van Cleef & Arpels, Lacloche, and other prominent Parisian and New York jewelers of the 1900-1940 period. The 49 boxes dazzle with their color and intricate detailing, and substantially enrich the gallery’s Art Deco collection.

Additions and acquisitions of new items in the jewelry arts are and will continue to be regularly incorporated into the jewelry gallery. One donation that has received a lot of attention is Beyoncé’s Papillon ring designed by Glenn Spiro in 2014. It was given to Queen B by Jay Z who photographed her wearing the jewel.
The V&A’s jewelry array not only includes important jewelry treasures, there are also great smaller designs. One of the most delightful new acquisitions is a little gold charm made by Cartier in 1975.
Unfortunately, it is strictly forbidden to photograph the museum’s jewels, you will have to rely on the help of your memory. But an afternoon learning about jewelry in this temple for personal adornments is a truly unforgettable experience.