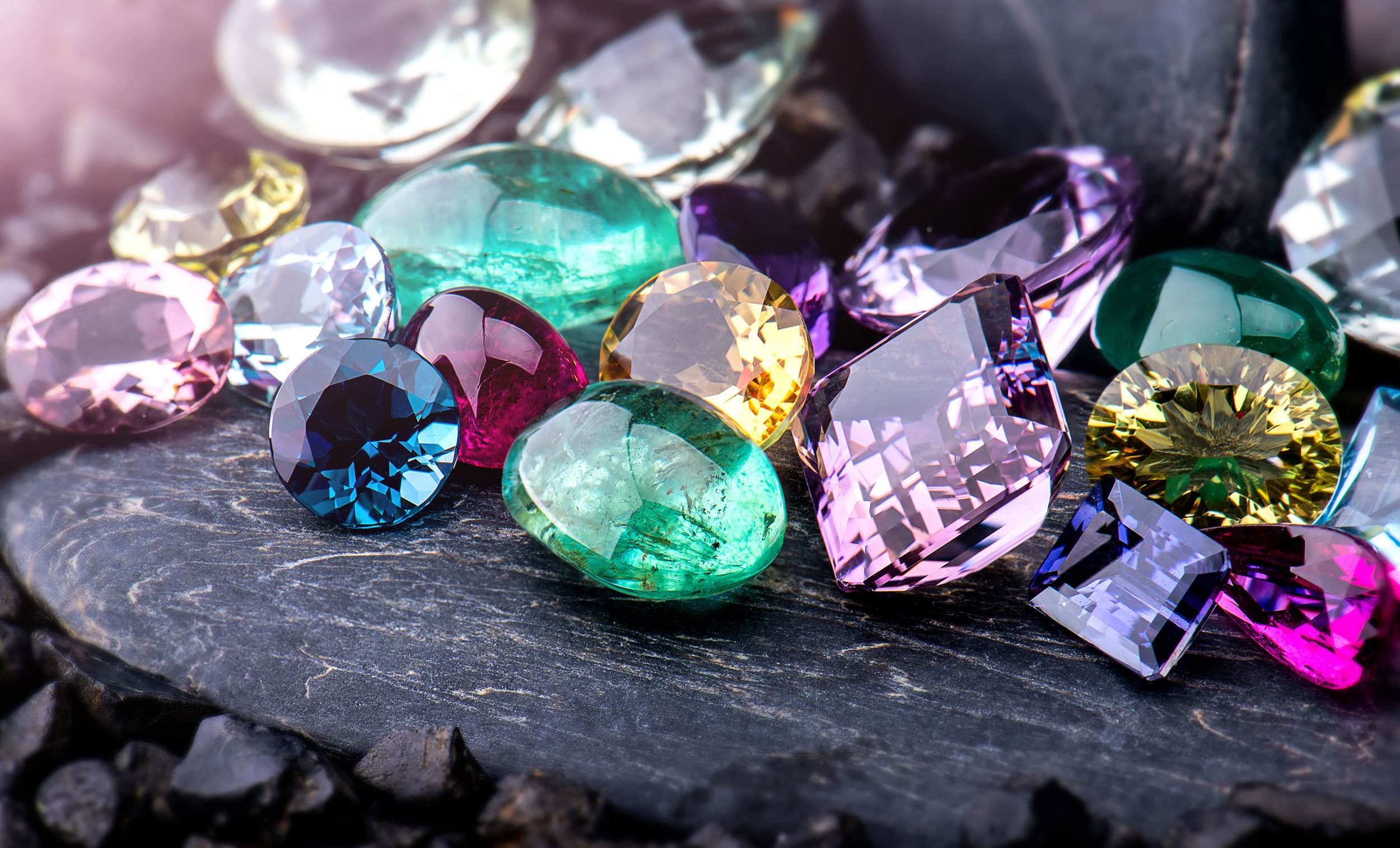 Over the centuries, various cultures have contributed to the legend and lore surrounding gemstones. These rare products of nature have inspired philosophers and mystics to attribute unusual powers to these special minerals.
When we consider some of the materials jewelry is made with—metals derived from the earth’s crust and gemstones, which, like crystals, have significant metaphysical properties—it’s hard to deny the cosmic allure. I made a list of the best known stones, followed by their meanings and curiosities.

Amethyst
Amethyst calms the emotions, encourages clarity of thought, and assists in attaining wisdom. Amethyst is a stone of the mind which brings calmness and clarity. Amethyst is said to attune its wearer with intuition, feelings and values. It has long been regarded as an aid to sobriety and is useful for combating alcohol, food and other addictions. It is also thought to ease obsessive-compulsive behavior.

Aquamarine
Aquamarine is associated with courage and the release of anxiety and fear. It is thought to soothe, calm, alleviate fear and to help relaxation on long journeys. Many believe that it protects sailors at sea, and prevents seasickness. Tradition holds that it gives insight and promotes mental clarity.

Blue Topaz
Blue topaz is associated with courage and overcoming fears and obstacles. It is a traditional stone for writers, scholars, artists and intellectuals, since it is used to encourage higher thinking. It is said to ease mental anguish and promote fidelity, friendship, gentleness and integrity.

Citrine
Citrine is said to open the mind to new thoughts and balance impatience and restlessness. Citrine is thought to promote optimism. It also attracts abundance and is known as the “merchant’s stone”; it is often placed where business is conducted, not only to acquire wealth, but to maintain it. It is also good for mental focus, endurance and self-esteem.

Diamonds
Diamonds are believed to absorb and amplify the thoughts of its user, as well as the strengths and weaknesses of other gems and their wearers. The ancients also used diamond for detoxification as it is said to protect from poison. Due to their physical properties, they’ve long symbolized power, strength, innocence, incorruptibility, longevity, constancy, and good fortune.

Emerald
Emerald is a traditional stone, and it is stated that emerald aids fertility, improves eyesight and gives the wearer psychic powers. It is also believed to lift depression and relieve insomnia. Promotes self-knowledge, peaceful dreams and encourages balance and patience. Some even believed that placing an emerald under the tongue could help one see the future, reveal truths, and be protected from evil spells.

Garnet
Garnet gemstones are regarded as the stone of passionate devotion; toward family, friends, the self and purpose in life. Believed to stimulate the senses, and increase vitality and stamina. Garnet is thought to attract good luck in business ventures. Garnets are often given as gifts upon departure for travel. When given in this context, they’re believed to grant quick, safe returns and eradicate the emotional distance between separated lovers.

Jade
Jade is a stone of serenity thought to alleviate anxiety, fear and to promote good luck. Jade not only brings prosperity, but encourages its wearer to hold on to money. A traditional charm for gardeners, jade is said to ensure bountiful harvests.

Lapis Lazuli
Lapis lazuli is an ancient stone said to represent friendship and truth. Blue lapis lazuli gems are believed to help bring about harmony in relationships. It is a stone of wisdom and awareness. Lapis lazuli has always been associated with royalty and deities, and it may be where the idea of royal blue came from.

Moonstone
Moonstone encourages communication by promoting clear thinking, inspiration and receptivity. It also assists in the fulfillment of one’s destiny. Long regarded as the gemstone for psychic abilities, wish fulfillment and balancing the emotions, moonstone is thought to work better on things that are needed rather than things that are just wanted. Similar to beliefs about emeralds, some ancients thought that placing a moonstone in the mouth during a full moon could help a person glimpse his or her future.

Black Onyx
Black onyx is said to repel negativity and protect its wearer from the hostility of others. It is a gem thought to enhance determination and perseverance.

Opal
Opal is regarded as a stone strongly associated with the emotions, including love and passion. It is also thought to promote spontaneity, imagination, dreams and healing. They’ve long been regarded as one of the luckiest and most magical of all gems because of their ability to show many colors.

Red Ruby
Red ruby is famous as a protector from misfortune and bad health, ruby is also used to open the heart and promote love. Given as a gift, ruby is a symbol of friendship and love. The ruby is also a symbol of vitality and royalty and represents beauty and wisdom. Numerous early cultures believed, because of the stone’s likeness to the color of blood, that rubies held the power of life. They’ve became some of the most sought-after gems.

Rutile Quartz
Rutile quartz is said to intensify the power of quartz crystal, rutile quartz is thought to assist one in getting to the root of a problem

Sapphire
Sapphire has long associations with peace and happiness, and is believed to help with communication, insight, intuition, inspiration and prayer. The ancients believed that sapphires could help them to predict the future.

Spinel
Since spinel was confused with ruby for centuries, it has not acquired the richness of meaning associated with other important gems. But it is said that spinel is helpful for relaxation and releasing worry. Since spinel is one of the very few singly refractive gems, it has a purity of color that may be the basis for its symbolic meaning.

Tanzanite
Violet-blue tanzanite is a recently discovered gemstone, said to be connected with the traditions of the Masai tribe, who believe that it has healing properties. The Masai give tanzanite to newborn children, since it is thought to represent life.

Tiger’s Eye
Golden brown tiger’s eye is said to help convert anxiety and fear into practical logic and action. It is also believed to promote balance and strength in difficult times, and to relieve doubt.

Topaz
Topaz, is thought to calm a bad temper and give strength. It is also said to improve mental clarity, focus and to increase confidence. Topaz gems are recommended for mood swings, insomnia, worry, fear, depression and exhaustion. Topaz was said to be able to cool boiling water, become invisible in the presence of poison, and create its own light.

Tourmaline
Tourmaline is said to strengthen both body and spirit. It is believed to attract inspiration, aid concentration, encourage balance and promote understanding. It is also thought to calm nerves, sooth grief, promote balance and build self-confidence. In numerous cultures, black tourmaline was believed to protect against dark magic.

Turquoise
Blue and green turquoise is believed to attract money, success and love. Turquoise is a stone of friendship in many cultures. Native Americans associated the colors of turquoise with the blue sky and the green earth. It is still seen by many today as being symbolic of our roots in nature.