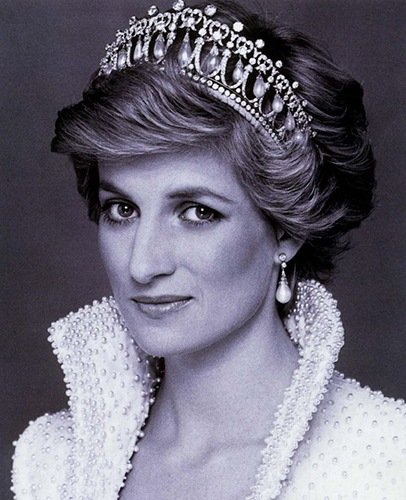 Tiaras are not just for Queens, but a woman must hold a certain royal title to wear one. Traditionally, tiaras are a sign of marriage. So typically they could be worn by a bride on her wedding day, or after she is married, she can wear one to any white tie event. Here a selection of 10 epic tiaras worn by famous royals.

The tiara, which many believe was selected due to both it’s sentimental significance and its all-diamond design, which complemented the bride’s Norman Hartnell gown also on loan from the Queen, marks the first time a modern royal bride has donned a tiara worn by another ancestral royal for her wedding day.

The tiara worn by the Duchess of Cambridge on her wedding day was on loan from the Queen and was originally a wedding anniversary gift from King George VI to his wife Elizabeth (also known as the Queen Mother) in 1936. The Queen Mother then gifted it to the Queen on her 18th birthday. It contains over 1,000 diamonds and was also worn occasionally by Princess Margaret.

The showstopping bandeau tiara worn by Meghan, Duchess of Sussex, on her wedding day was made by Garrard in 1925 for the Queen’s grandmother, Queen Mary. It originally had a sapphire centerpiece, but it has since been changed to a diamond. It was loaned to Meghan by the Queen for her wedding day. The tiara was also worn by the Princes Margaret, the Queen’s sister.

The Delhi Durbar tiara is one of three on loan from the Queen to her daughter-in-law Camilla, Duchess of Cornwall. Made by Garrard, it was originally made for Queen Mary in 1911 for a celebration in Delhi to mark the coronation of King George V and Queen Mary as Emperor and Empress of India.

The Greville tiara was made by Boucheron for Dame Margaret Helen Greville in 1920. It is also known as the Boucheron Honeycomb tiara, and is worn by Camilla, Duchess of Cornwall. Greville left the tiara to the Queen Mother when she died in 1942, and upon the death of the Queen Mother in 2002, the Queen inherited the headpiece. It is now one of three tiaras on long-term loan to Camilla, who married Prince Charles in 2005.

Also known as Queen Mary’s Lover’s Knot tiara, this diamond and pearl headpiece was commissioned by Queen Mary in 1913 when she had asked British jeweler Garrard to replicate a tiara owned by her grandmother, Princess Augusta of Hesse-Kassel. It was inherited by the Queen, who gave it to Princess Diana when she married Prince Charles, but it was returned to the Queen after the couple divorced in 1996. Today it is owned by the Queen and remains a favorite with the Duchess of Cambridge, who borrows it for special occasions.

The York tiara was worn by Sarah Ferguson when she married Prince Andrew in 1986, and was a wedding gift from the Queen and the Duke of Edinburgh. Made by Garrard, Fergie hid it under a flower crown for her journey to Westminster Abbey. She has since split from Andrew, but retains ownership of the tiara. It is the piece most likely to be worn by her daughter, Princess Eugenie, on her wedding day.

This tiara was a wedding gift to the Queen from her mother-in-law, Princess Alice of Greece and Denmark. The Queen gave it to her daughter Princess Anne in 1972, who wore the tiara in her engagement photos with Captain Mark Phillips. It was also worn by Princess Anne’s daughter, Zara Tindall, on her wedding day in 2011.

The Girls of Great Britain and Ireland tiara is the headpiece most frequently worn by the Queen, it’s even featured in her portrait on British currency. The tiara was a wedding gift from her grandmother, Queen Mary, and the first she owned herself. The tiara was originally a wedding gift for Mary when she married the Duke of York, who later became George V, in 1893. It was sent from the girls of Great Britain and Ireland, and commissioned by a committee lead by her friend, Lady Eve Greville.

Princess Margaret wore the Poltimore tiara for her wedding in 1960. The Garrard-made creation dates back to 1870, but the royal purchased it from the Poltimore family herself at auction for around $7,200.