The First Ornaments in Human History 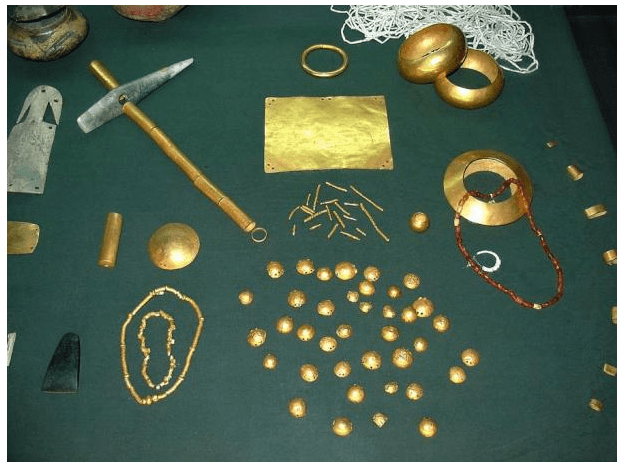 In late 2013 a professor who’s in charge of the Neanderthal Collection in Croatia, took a fresh look at some eagle talons found among the items. She noticed numerous cut marks on the talons and realized that they must have been used as jewelry. An international team had confirmed professor Radovcic’s theory changing our perception of the Neanderthals. Also, it indicates that the need for ornaments predates the modern men, since the pieces were dated to have been made 135,000 years ago.

In Ancient Egypt jewelry was first made around 3,000 to 5,000 years back. The Egyptians adored the shine, rarity, and workability of gold. They had accumulated abundant gold from the deserts of Africa and later acquired more as tributes from captured kingdoms. In Egypt, jewelry soon symbolized power. The affluent class wore it not only in their lifetime but also after death, those were buried with them.

The tradition that was carried on by the goldsmiths of Egypt was responsible for the funerary mask of Tutankhamun, the bust of Nefertiti, the golden covering stone of the Pyramid of Giza and many other wonders. none of this would have been possible had it not been for the first creations of necklaces and bandages some 5,000 years ago.

In Mesopotamia, jewelry was manufactured from metal inlaid with bright-coloured stones like agate, lapis, carnelian, and jasper. Their favourite shapes were leaves, spirals, cones, and bunches of grapes. It was created both to adorn humans and statues.

The oldest pieces come from the royal cemetery of Ur. The Mari registers give us an idea of ​​some pieces that have not been recovered, for example, a lapis lazuli necklace with 28 of them rounded and 29 fluted.

In Greece most of the jewelry was made of gold, silver, ivory, gems, bronze and clay. Later they adopted Asian designs following Alexander`s conquests. Initially influenced by European designs, the advent of the Roman rule in Greece, by 27 BC, brought significant changes.

The most common ornament of ancient Rome was the brooch, used to secure their flowing clothes together. They used gold, bronze, bone, glass beads and pearl, sapphires from Sri Lankan and diamons from India.

The Italians earlier created clasps, necklaces, earrings and bracelets from crude gold. Even large pendants to store perfume were made. The Byzantine Empire continued the Roman tradition though religious symbols that became predominant. The people of Byzantine preferred light gold ornaments richly inlaid with gems. Jewelry was mainly worn by wealthy ladies while men restricted themselves to a signet ring.